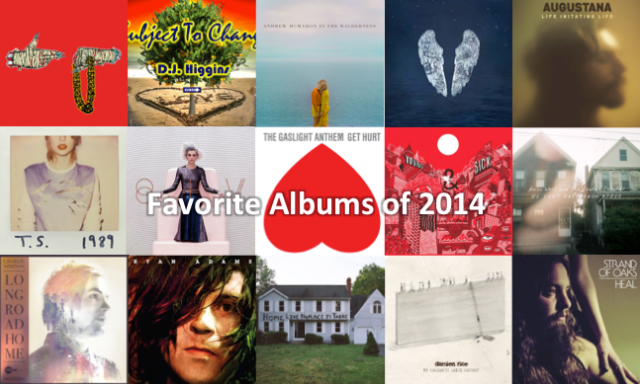 I’m back to write about five more albums I loved this year (for Part 1, click here).

I’ll get to writing in a bit, but first I thought it might be fun to break down my top 30 list a little bit more. First, there’s release month: 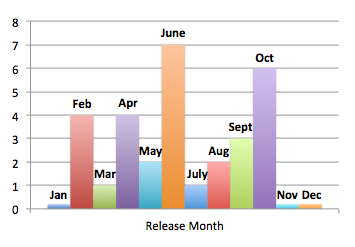 Now, what’s this mean? While it makes logical sense that my favorite albums of the year wouldn’t be evenly distributed, it is surprising to me that nearly two-thirds came from the first half of the year. It’s especially crazy to think that none came from the two most recent months of November and December (Damien Rice’s My Favourite Faded Fantasy came closest, dropping on Halloween). A lot of it comes from giving weight to staying power–J. Cole and D’Angelo are two artists who dropped albums in the last month, and no matter how much time I spent with them, I just couldn’t make them fit.

Here’s where my favorite albums came from: 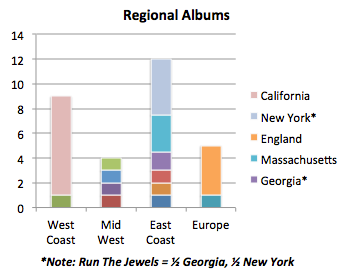 California (8), New York (4.5), and England (4) were the places from which the most albums from my Top 30 List originated. Only 5 of the 30 were from outside of the USA, and every American artist came from a major  city (with the exception of Angel Olsen from St. Louis, MO). 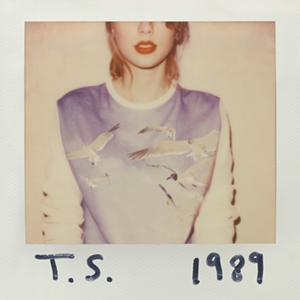 Yes, it was the most hyped album of the year. Yes, it made Taylor Swift and her label millions of dollars. Yes, you still can’t find it on Spotify. Yes, she wrote songs with some co-writers. And yes, it’s not her best album (in my opinion, that would go to its predecessor Red).

Ignore the maelstrom of publicity and zeitgeist-clammoring commentary surrounding 1989 and you’re left with–hands down–the best pop album of the year. Its hooks are massive, with concise songwriting that is designed for maximum impact at every moment (the M83 octaves of “All You Had To Do Was Stay”, the horns bumping under “Shake It Off”). The production is layered and complex, with the most inventive harmonies in modern pop (the bridge of “Blank Space”, pretty much every second of “Out Of The Woods”). And most impressively, Taylor’s voice has never sounded better (if I could bottle that vocal echo at 2:08 in “Style”…oh man). So yes, a lot of great music was released this year that’s not accessible, mainstream pop. But while everyone’s been complaining that Taylor Swift is taking over the world, they could’ve been getting down to this sick beat.

Listen: “Blank Space”, “Wildest Dreams” (if you can find it, haha) 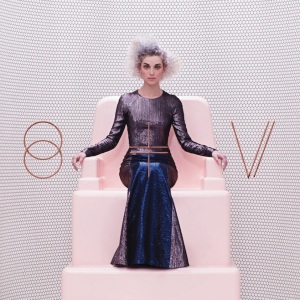 It’s just so…alien. In the psychotropic buzz of “Rattlesnake”, the titular creature chases Annie Clark through a desert until she’s reborn into something new. The next 41 minutes siphon that energy and pack it into eleven compact songs, each more intriguing than the next. I’m struck over and over by Clark’s truly awe-inspiring guitar-playing, by lyrics that are both profoundly obscene and obscenely profound, and most of all by the confidence that pushes her to be an Artist when there aren’t many stepping up in rock music. All of that gushing doesn’t quite show why I’m enraptured by St. Vincent though. The most beautiful moments on St. Vincent’s self-titled album, like the anti-hymnal “I Prefer Your Love”, find the ‘heart’ in ethereal–the humanity that helps the strangeness hit home. 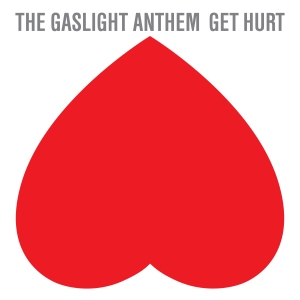 8. The Gaslight Anthem – Get Hurt

Get Hurt is my least favorite Gaslight Anthem album, but it might be their most important one. Up to this point, it felt like I could draw a straight line from record to record…add some instrumentation here, tweak a lyric-writing style there, open up the songwriting to a few new forms, and voila, another near-perfect rock album. It was all stellar, but safe.

For better or worse, this new album doesn’t rest on its laurels. There’s a lot of great ideas bubbling around alongside classic fist-pumpers like “1,000 Years” (maybe the band’s catchiest chorus ever) and “Dark Places” (a spiritual sequel of sorts to their best closer). Songs like the title track and “Selected Poems” find the common ground between Brian Fallon’s masterwork with The Horrible Crowes and his main band. The piano-led vocals on “Underneath the Ground” create an effect that’s both confusing and exciting. Bonus track “Have Mercy” brings a female harmony into the mix, and it can’t be understated how beautiful I find it. It’s the first time listening to a Gaslight album when I feel like I don’t know what they’re going to bring to the table next time around. If the price of that is an album I’m not in love with, count me in. 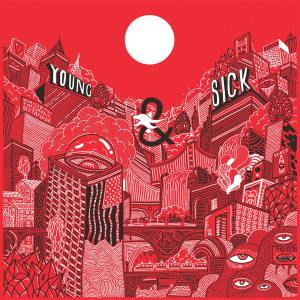 In a year when pop music got sleeker and shinier than ever, the most compulsively listenable album of them all flew entirely under the radar. I’ve already written about the magic of opening track “Mangrove”, but the rest of Young & Sick’s self-titled debut needs to be described. On tracks like “Heartache Fetish” and “Gloom”, Nick Van Hofwegen layers his otherworldly voice over a waltz of keys, horns, and digital effects. The marriage of analog and digital here can’t be overstated. Young & Sick’s music flows like drainage during a light rain, ticks along like pocket watch innards, fades like a starry night time-lapse. Maybe it’s just the natural endpoint of pop’s current reclamation of 80’s music. Either way, it’s something everyone should give a chance.

6. Aaron West And The Roaring Twenties – We Don’t Have Each Other

This concept album (by The Wonder Years’ Dan Campbell) follows a character named Aaron West as he goes through “the worst year of his life.” It’s meant to be entirely fictional, but without that disclaimer you’d never know it. Campbell empties himself out onto this record, dealing with divorce, miscarriage, alcoholism, and depression through some of the most personable and direct lyricism I’ve ever heard. It can be hollowing at times, with songs that focus about a foot below my chest, right in the pit of my stomach. But ultimately, the warm horn-led production (courtesy of The Early November’s Ace Enders) and sing-along hooks fill it right back up again. The music ends up contradicting the album title–when I’m commiserating with Aaron West, I feel like at least we have each other.

Listen: “Divorce And The American South”, “The Thunderbird Inn”

Thanks for reading. Hope to be back soon with my top five of 2014.

This entry was posted in Album Reviews, Music, Playlists and tagged aaron west and the roaring twenties, ace enders, end of the year, end of the year list, EOTY, get hurt, guitar, horrible crowds, music, pop, st. vincent, taylor swift, the early november, the gaslight anthem, the wonder years, we don't have each other, Young & Sick, zeitgeist. Bookmark the permalink.