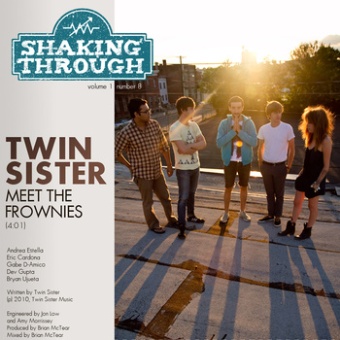 There’s an old saying that goes: “Autumn leaves. That’s just what it does.”

Okay, fine, I made it up. Still, it’s a pretty accurate way to describe the sense of longing that comes around during early October. Autumn weather is my favorite. I love the in-betweenness of the season, how the crispness in the air rubs against the last vestiges of summer. It permeates through the whole city until even your skin can feel the disconnect between where you’ve been and where you’re going. From the moment I heard it in 2010, Twin Sister’s “Meet The Frownies” is my go-to song choice for exemplifying this feeling, and the backbone of any Fall playlist.

Though the song originally gained a little traction as one of the more popular offerings from Philly’s local Shaking Through series, rap heads will mainly recognize it as the sample from Kendrick Lamar and Dr. Dre’s ode to West Coast living, “The Recipe”. That permutation treats Andrea Estella’s vocals as a mini-anthem, celebrating the city’s heritage and current glories all at once in traded verses of bravado. But while it’s an inventive flip, it doesn’t hold a candle to its chillwave cousin. The original is much more wistful, even quiet. Estella’s voice practically disappears under the cover of that lethargic haze that the band builds from their stilted synths, ringing guitars, and fuzzed-out percussion section. It hides in the sound, equal parts romantic nostalgia, wondrous observation, and homeostasis–the perfect mood for watching leaves start to turn and fall. Yet somehow, it’s impossible to miss her singing amidst the space, like she’s honed specifically to your hearing range.

As much as Estella’s vocals carry the tune, the song’s lush production is where it really comes into its own. The guys over at Miner Street Recordings did an excellent job balancing the darker tones with more ambient noise, including an out-of-tune radio. Everything sounds like it’s mixed to varying levels of distance, from “just over there” to “far, far away”. This adds to the feeling that the song exists out of time, in the same unconscious place as deja vu. It’s as if you’re falling through the air and you don’t know where you’re going to land, but somehow you know you’re going to be alright. Autumn leaves. That’s just what it does.

Play this song: On a walk through the woods in early fall, preferably while holding hands with someone.

For more about this song (which was written and recorded in under 12 hours), click here.